How to Spot and Solve Pesky Litter Box Problems

Based on an article that first appeared at
Kelly's Animal Hospital

The most common reason for euthanasia in cats or, really, pets in general in the United States is behavioral issues. These cat behaviors can range from aggression and biting to elimination or “potty issues” or “potty training issues”. And while there are circumstances where euthanasia is warranted for truly bad and potentially dangerous behavior, it’s also possible to head some of these problems at the pass by getting to the root of the issue.

When a pet does something out of character like inappropriate urination or defecation, have your veterinarian first rule out medical reasons for the behavior. When it comes to cats that urinate in inappropriate places, one must determine whether it is urine marking, inappropriate urination, or whether the cat has an underlying medical condition. We know you love your fur baby but we also understand the frustration of a kitty going outside the litter box, so we’re taking the time today to round up the various reasons your cat might be partaking in inappropriate elimination, and what you might be able to do about it.

If your veterinarian has ruled out a UTI or other underlying medical condition in your cat such as kidney stones or FLUTD (feline lower urinary tract disease), the following could be reasons for the inappropriate feline elimination: 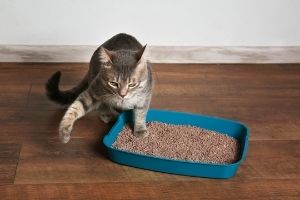 We've already touched a bit on underlying medical conditions that can cause this, and it's important to consider the following when you've got a kitty who's going outside the litter box. A cat that has FLUTD will urinate right in front of you for two reasons. The first is that the urge is so great, they can’t make it to the litter box. The second reason is they are trying to get your attention so you can help them.

A urinary tract infection is usually characterized by the presence of blood and white blood cells in the urine and a high pH. Male cats can obstruct when urine crystals are produced, so it is a medical emergency when a male cat is seen to strain at the litter box or urinating in inappropriate places. 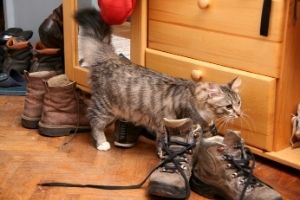 But How Do I Know If It’s Urine Marking?

Much like an underlying medical condition must be ruled out as the cause for inappropriate feline elimination, so must urine marking. As the ASPCA notes, "A cat who urine marks will regularly eliminate in her litter box, but will also deposit urine in other locations, usually on vertical surfaces. When marking, she’ll usually back up to a vertical object like a chair side, wall or speaker, stand with her body erect and her tail extended straight up in the air, and spray urine onto the surface. Often her tail will twitch while she’s spraying." You'll also likely see quite a bit less urine when a cat is marking versus going completely outside the litter box.

If there's one thing new cat owners learn very quickly it's that cats are not only extremely picky creatures, but they are also able to send you strong messages about their preferences. Don't ignore the signs, as you might end up assuming you have a naughty kitty when you simply have one who's trying to tell you to make a few adjustments. If you have any further questions about inappropriate feline elimination or you want to have your cat tested for an underlying medical condition, please give us a call.

Orchard Road Animal Hospital   review us!
Back to top